This Friday, marks the release of the long-awaited sci-fi/horror film, Prometheus. Director Ridley Scott has been notoriously wishy-washy as to whether or not this is still the Alien prequel that he had been signed onto for the last few years, but by all accounts the film is set in the same universe as his 1979 breakout film, set before it as well, and clearly uses some of the same elements (which I will get into). So for my money, this is at least a loose prequel to Alien. 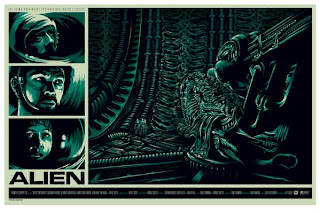 Anyway, since the movie is a classic, many of us know the plot; Tom Skerrit plays the captain of the Nostromo, a cargo-hauling spaceship that has been drafted into investigating an alien transmission from a desolate planet. The crew -- including Ian Holm, Yaphett Kotto, John Hurt, and Sigourney Weaver in her breakout role -- reluctantly land, and discover too late that the signal is a warning, to stay away from a crashed extra-terrestrial vessel.

Hurt's character is attacked by a parasite that clamps onto his face. Weaver's character -- the now-immortal Ripley -- knows that they need to get rid of the damn thing, but Holm's over-zealous science officer insists they keep it around, and thanks to a secret order from their employers, he gets the final word. Shortly afterwards, a smaller alien bursts out of Hurt's chest, and things only go downhill from there...

Without waxing my inner Cinema Snob too much, there is very good reason why this movie is still considered one of the all-time best horror films. Even in my personal favourite list, I group it alongside The Exorcist, Hellraiser and the remake of The Fly -- films that are truly horrifying and shocking, yet are also well-crafted, imaginative, and yet strangely quite believable. Alien doesn't plod, but doesn't rush into things either (which is more than can be said for many of its imitators and sequels). Nor does it get any more gory than it really needs to be -- despite the plethora of disturbing things we're made aware of. When you break it down on a technical level, much of it is even pretty straightforward in terms of the setting and plot... yet it all ticks down like a bomb you know cannot be stopped.

While many of the actors were subsequently relegated to minor character roles, they all bring their utmost to the characters. And while there is little overt exposition, the chemistry among the actors is so solid that you feel for every single one of them -- even the more sinister ones. And while I don't usually comment a lot on makeup and production design, it's impossible to write about the Alien movies, without talking about the alien itself; an erotic, biomechanical monstrosity, brilliantly conjured by Swiss surrealist H.R. Giger. By the way, do you want to know how I first "met" this thing? On Disney's Great Movie Ride, when I was six years old, and my idea of "haunted" was a goofy dark mansion that staged a ghostly song-and-dance routine... only to have this damn thing snarling at me from the ceiling AND the wall.

Anyway, I don't know what else to say about this movie. If you've never seen it, SHAME ON YOU. Even if sci-fi/horror movies aren't usually what you'd see, you owe it to yourself to give this a look, just to see how such movies SHOULD be made. This is a movie that has a brain, yet will terrify you to the very bowels of your soul.
Posted by BoredomCorner at 11:26 AM

BoredomCorner
I believe in speaking out against the nonsense, while I still can.